Aglantzia’s residents, by nature attached to religion, left their footprints of religiousness on the churches and the chapels since ages. Today large and new churches have been built.

The large church, in the town centre, near the offices of the Municipality is dedicated to Saint George.

It was built between 1959-1964 and was inaugurated in June 1967.The Community Leader of Aglantzia, Nicos Constantinou, was the pioneer for the building and functioning of the church together with a small group of associates.

The church is of Renaissance style with very high domes and beautiful columns with carved capitals. It becomes even brighter with the hagiography that began in 1996 on the initiative of the Ecclesiastical Committee and the priests Father Diomedes Constantinou and Father Georgios Kaparis

The church of Saint George in Athalassa is a building of Hadjigeorgakis Cornesios. The only proof for the year of construction of the church is an embossed plaque above the north entrance on which the year 1793 is written. This church is single-aisled with vaulted roof and is similar to the church of Saint George in Aglantzia, which is located in the old cemetery of the community. The historian George Jeffery, in his book “ A description of the historic monuments of Cyprus” (Nicosia, 1918 – new edition London, 1983), mentions that this particular church was probably destined to become a monastery, which was never completed. Its 18th century iconostasis is wood-carved and has a length 4.10 m. and a height 4.40 m. It includes a very old icon of Saint George on his horse, which is dated at the end of 18th century and is considered as one of the original icons that were donated to the church at the start of its function. The icon has height of 1,25 cm and length 0,85 cm. and it was covered by silver in 1960.

Among the ecclesiastical vessels there is a cooper sania (alms collection tray) with a diameter of 41 cm. and a cooper tray with diameter 30,5 cm. On both these vessels, a variety of characteristic figures of the Turkish era are engraved. There is also a silver holy bread tray which was donated as a gift by the Kazantzides family of Nicosia and a Gospel with silver plated cover which was given as a gift by Athina K. Dianellos, in 1908. There is also a Gospel and other ecclesiastical books of the 19th century.

The core of the original byzantine settlement of Aglantzia was on the site where today there exists the Old Aglantzia, near the areas of Panaghia Theotokos ( Virgin Mary) and Saint George.

One of Hadjigeorgakis Cornesios’s donations, which are mentioned in Aglantzia, is the construction of the church of Saint George that still exists in the community’s cemetery, which is used even today.

The church that was probably built in 1797 is single-aisle, vaulted and replaced a previous church that existed nearby during the Frankish period (it is probably the one mentioned by George Voustronios, a 15th century Cypriot chronicler, as the church of Saint George). In the church an old wood carved 18th century icon stand is preserved, that has a beautiful decoration from baskets and pots with flowers, motives of that era.

This church was renovated in February 1852 and fourteen years later, in 1866, obviously because of the increase of the population of the village, was extended in length with donations of the residents. A new renovation took place in 2006, by the Archaeological Services.

It was functioning as a parish church until 1967, when the construction of the large, new church dedicated to Saint George, opposite the Offices the Municipality of Aglantzia was completed. 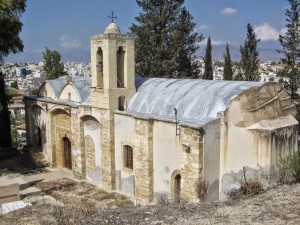 Known as “Virgin Mary of Skali”, the church of Panaghia Theotokos is a medieval building of the15th century. It was originally dug out in the rock, where the present day church which was built at the beginning of the 20th century by Ippokratis Veroplides, a resident of Aglantzia. Icons of Virgin Mary and Saint John the Baptist, of the 17th century (1609), are saved and archived in the temple of the church. They were discovered by workers that were quarrying rocks in the area.

The church was renovated in 1995 with expenses of the Archaeological Department, Aglantzia’s Municipality and of the Holy Church of Saint George. It is of a basilica style and preserves the traditional way of building with shaped stones. It was inaugurated on the 8th of September 1996.

In 1979 a modular building was erected as a church in honour of st. Andrew, on Kyrenia Avenue, in Platy, in order to cover the functional neeeds of the refugees that resided in the area after the invasion of 1974. Since that time, efforts were made to build a bigger church, something that was achieved and in November 1985 St.Andrew’s church was inaugurated by Archbishop Chrysostomos A’, the holy creation of the sisters Elpiniki and Maritsa Papadopoulos, refugees from Kythrea.

In November of 1997, the Spiritual Centre, next to the church, was inaugurated by the President of the Republic of Cyprus, Mr. Glafkos Clerides, and the Archbishop Chrysostomos A’. The centre is used for various events of the parish, as well and for the Sunday school meetings of the children of the parish.

In 2004, on the site of the old, modular church, with the contribution of the Hadjipanteli family from Yialousa, a small temple devoted to Saint Thyrsos was built, in memory of their father, Savvas Hadjipantelis, who was a missing person during the Turkish invasion of 1974 up until 2006.

The chapel of Santa Barbara was built in 1969 next to “Demetrakis Christodoulou” barracks in Athalassa. The chapel was made as a temporary construction to serve the Artillery servicemen whose patron saint is Santa Barbara.

In 1974, during the Turkish invasion, battles took place on the site of the chapel, where many people lost their lives. After the invasion, the chapel of Santa Barbara proved a point of support, not only for the soldiers but the residents of the area as well, the majority of whom were refugees who had settled in the region.

In 2010, the priests and church committee of Apostolos Andreas church in Platy, following efforts of many years secured the necessary permission and moved forward with the construction of a new church for Santa Barbara. The new church is in a style of a three-aisled, wooden-roofed basilica, with an elevation in the centre. The dedication ceremony of the church took place on June 16, 2011.

The memories for the occupied village the ruined churches of Saint Charalambos, John the Baptist and the chapel of Saint Theodoros, were torturing the mind of the village pastor, high-priest Diomedes Constantinou continuously, who in a meeting with the associations and other prominent agents of the village, expressed his passion, desire and wish work together in order to build the holy church of Saint Charalambos and an events hall in Nicosia, as close as it could be to the occupied village, which is only seven miles away from the capital.

Construction of the church started on July 2005 and it was completed on September 2006.

The first service was carried out on 10th February 2007, on the feast day of St. Charalambos regardless of many shortages in equipment of the church, in a moving atmosphere by the high-priest Diomedes Constantinou and a large number of fellow villagers who arrived from all over Cyprus.

The consecration took place on 10th February 2008 and since then there is a church service every Sunday.

It is located in Meteora Street, in the area named “Doriforos (Satellite)”

A prestigious church dominating the area of the Foundation of Saint ‘Nektarios, built in 1990. Is located in Platy Aglantzia, in the region of the Cyprus Broadcasting Corporation.

The first service was administered by the priest Papastavros Papagathaggelou, a youth recruiter in the EOKA struggle, in a large hall of the foundation where the nuns were looking after the old people. With donations and many efforts by the faithful of the Foundation, the beautiful church in front of the foundation was built and it is functioning continuously.

Besides the two large churches, during the first years of Christianity the settlement had a lot of other small churches, one of them is the chapel of Saint Marina where it is said that catacombs existed. Today there is an icon-stand of Saint Marina on the street of the same name.

Southwest of Saint Marina, there is a small church, simple and plain, dedicated to Saint Mavri and Saint Timothy. Tradition says that during the Turkish rule, in that location the specific icon and its holy water were found.

It was built in 1964 with expenses of the devout christian, the late Hadjikyprianos Demetris Mitas. It was inaugurated in 1979. It was renovated by an anonymous, pious lady in 1996 and is commemorated on 3rd of May.

A Church, with modern architecture, dedicated to Saint Lazarus. Its construction was concluded in November 1993, at the same time and in the same place with the new cemetery.

The initiative for its building belongs to Aglantzia’s Municipality. It was inaugurated on the 10th of October 1997 .It functions on the feast of Saint Lazarus’s day, by the priests of Saint George.

The Church of Agia Sophia and Saint Irene is located in the grounds the Police Headquarters. It was built with the donations of the Police and Fire brigade members, as well as with noble donations of friends of the Police, and it belongs ecclesiastically to the Holy Archbishopric of Cyprus.

In December 2004, the service ceremony for the foundation stone was carried out, and on 19th January 2006 the inauguration was carried out by the abbot of the Kykkos Monastery, Nikiforos. In March 2006, the Holy Archbishopric approved a request by the Police to dedicate the church to Aghia Sophia and Saint Irene.

The Church of Aghia Sophia and Saint Irene is used for ceremonies and sacraments such as weddings and christenings, serving members of the Police and Fire-brigade.

The church is celebrating twice, on the 5th of May, feast day of Santa Irene, the patron saint of Police and on Mid-Pentecost (the fourth Wednesday following Easter Sunday), the day when God’s Wisdom is celebrated.

The next building, purposed as a guest house and a meeting and events place for Police members is now used as a Police hall of residence.

Within the framework of the effort to reorganize the Teacher’s College to a Pedagogical Academy in 1959, the directory decided to build a chapel for the religious needs of the schools’ residents.

A meeting was held on the 10th September 1959, in the office of the director Mr Frixos Vrahas, where the President of the Greek Community Assembly Mr Stavridakis, the Professors of the School Mr Andreas Chrysochos and Mr George Kaminarides, and the architect of the Department of Public Works Mr Xenophon Ioannides were present.

Initially the place for building the chapel was selected and its size and shape was decided. As a basic unit of space the size of a traditional Cypriot house was chosen, a two-room 25×11 ft., multiplied five times in length. The arch of the “two-room “was the basis of the architectural design, which was carried out gratis by Xenophon Ioannides.

Archbishop Makarios C’, undertook the cost of £ 5,000 budget for the construction and furnishing.

The foundation stone was placed on 9th December 1959. The construction work was completed beginning of June 1960.The inauguration was carried out  by the President of the Republic of Cyprus Archbishop Makarios C’, during the night of Sunday 5th to Monday 6th June 1960, in the presence of the School’s professors.

The project contractor was Mr Savvas Patsalossavis, and the iconostasis was made by Mr K. Taliadoros.

The portable icons and all the murals were pained by the Art professor of Pedagogical Academy, painter Andreas Chrysochos. The chapel symbolizes the inseparable ties of Church and Greek Education.

It is located in the barracks”Iacovos Patatsos” at the Headquarters of the National Guard.