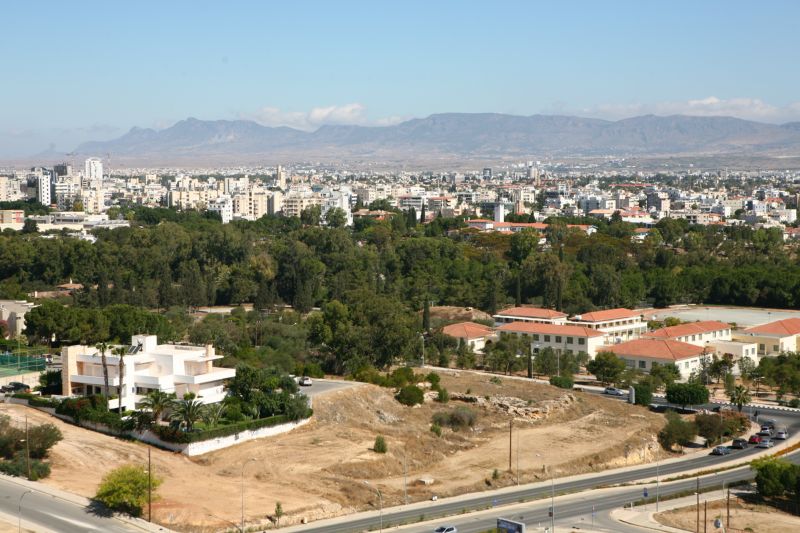 Aglantzia is the highest suburb of Nicosia; because the biggest part of the town is built on hills, slopes and plateaus. This crucial location was chosen for defensive purposes and because here existed and still exist natural water sources and an excellent climate.

The history of Aglantzia has deep roots in Antiquity. We now that it existed since at least the fourth millennium B.C., because at the trapezoidal hill of Aronas (Mountain Leontari or Liontarovounos), a number of graves were found dated in the Cooper Age. Around the hill existed an ancient settlement, where Ledra in all probability became its successor town.

In the region The Kafizin is also located (in the ‘buffer zone’) or Small Aronas, a historical site with a cave for the adoration of the Nymph, where major ancient findings (vases, utensils, cups, amphorae, etc.) and inscriptions in Cypriot syllabary script and common Greek language were discovered. It is here that Cantharus with votive alphabetical inscription was found as well, that constitutes the emblem of the Municipality. The use of Nymphaios dates from the Hellenistic period, 225-218 B.C.

In the region of Aglantzia, there existed during the Middle-Ages, the settlement Lefkomiatis. The region appears to have been settled by the end of the Frankish rule, by Iacovos B’ (1468-1473) and its name is believed to be derived from the surname of a Frankish family that owned the whole region. Besides, in Liontarovouno there exist the ruins of the Medieval Castle of La Kava, which was built around 1385 by King Iacovos A’. In 1426, the Castle was seized by Mamelouks while later the Ottomans used it as a gun powder store. In the 19th century the Castle was demolished and its stones were used as building material for the construction of Faneromeni church in Nicosia.

After the conquest of Cyprus by the Turks, the settlement of Aglantzia started to decline. Round the end of the 18th century it started to form an autonomous agricultural settlement. Its inhabitants are occupied with agriculture, livestock and quarrying. By the end of 18th century, the dragoman Hadjigeorgakis Cornesios  builds he church of Saint George in the site of the cemetery and Saint George in Athalassa.

In modern times, the participation of the residents in the national struggles of Cyprus must be noted. During the EOKA struggle, Aglantzia gives is present with organized groups .One of the heroes that were sacrificed to the liberation struggles was Kyriakos Karaolis, from Aglantzia. In 1964’s incidences, volunteer national-guards joined various army companies. Andreas Nicolaou Koutsou was killed in fight. During the Turkish invasion in 1974, Aglantzia was not only bombed unrelentlessly, but paid a heavy price in lives lost of its residents, whose some of them the names are still on the list of missing persons. Since 1974, 45% of Aglantzia’s land is controlled by the Turkish military occupation troops.